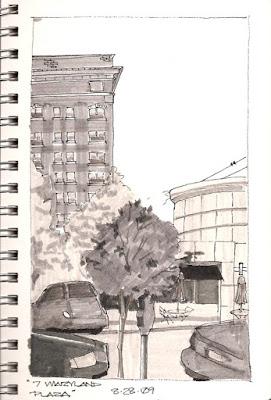 I've been experimenting with using grey-scale markers to create value sketches. This isn't a new idea out there in the world of drawing, but I ran across a demonstration in one of my books, "Watercolor Journeys" by Richard Schilling where he uses a two-marker system to create three-value sketches (a middle gray, dark grey, and the white of the paper to make up the three values) which got me started thinking about and using this technique.

Last year, I bought a set of Faber-Castell Pitt Artist Pen Manga Set. This set contains eight pens (one fine-nib black, one medium-nib black, and six brush pens of varying values of gray). I haven't used this set for much, but thought it would be perfect for the two sketches pictured here. Both of these sketches were done on location, plein-air style. Using the pens is much like watercolor painting: I laid down my lightest values first, then worked from light to dark. My method differs from Schilling's, in that he puts down everything that's in the middle value first, then adds the darks, then adds details with a fine-line pen (whites are planned for ahead and painted around). I find Schilling's method slightly more difficult, but I have followed along with his demonstration in his book to get the feel of it (results not pictured). 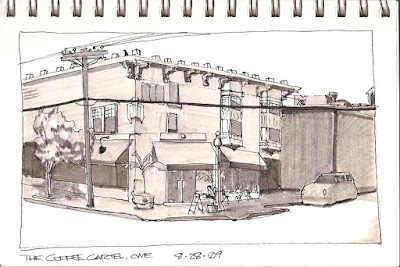 Both of these sketches are 6" x 9" (15 x 23 cm) in my Aquabee Super Deluxe 808 sketchbook. I did these two sketches on a heavily overcast day, so I didn't have the opportunity to really render much shadow and light as I would have preferred. However, I felt is was more important to get out there and produce work than wait for perfect weather conditions.
Posted by Steve Penberthy at 11:13 AM