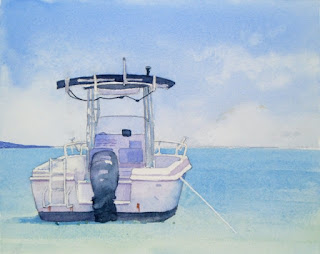 
This painting was requested by a friend; he will be giving the painting to his wife as an anniversary gift. This boat is her father's, and represents one of her favorite things--getting out on the boat in Florida. I was in their wedding, so it was especially cool to paint this for them. Happy Anniversary guys! :)

I painted large washes for both the sky and the sea. The sky is a single wash of Cobalt Blue [Holbein], with clouds created by lifting pigment with a paper towel. The sea is a glaze of two washes of Cerulean Blue [Holbein], which I "greened" on the second wash by mixing in a little Hansa Yellow Medium [Daniel Smith] to suggest the thinning depth as it approached the sand, and the violet shadows were a mix of Ultramarine Deep & Perm. Aliz. Crimson [both Holbein]. The metallic hues were made with the Cerulean greyed by mixing in some Pyrrol Orange [Daniel Smith]. Darks (boat's roof, riggings) were done in Indigo [Holbein].