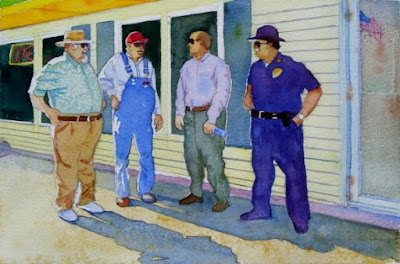 I know all but one of the men in this painting. These guys were standing in front of a Subway restaurant near a courthouse square at an event I attended a few years ago. I painted this from a photo reference.

I chose this scene because of the strong morning sunlight, and thought it would be challenging to paint a scene mostly in shade but with some strong sun.

One of my favorite parts of the painting is the reflection of the American Flag in the doorway on the right; the flag was flying at the courthouse across the street.

I don't use salt as a watercolor technique much at all, but I used it extensively in this painting; I wanted it mainly for creating a texture on the concrete sidewalk, but I found it to be useful as a texture on the shirt of the man on the far left as well as creating a mottled effect on the door reflection where the flag is.

This was an extremely satisfying painting on which to work; it took me a while, especially the pencil sketch, but it was very worthwhile. Here's a thumbnail of the initial pencil drawing:

Hope you enjoy it as much as I did creating it!
Steve