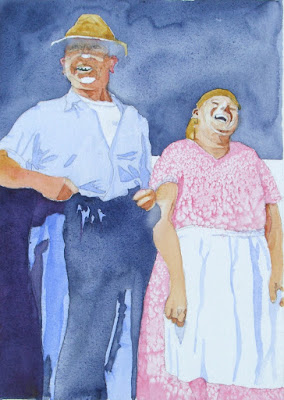 
I based this painting on a photo from the Library of Congress' Flickr site. The woman's expression was really appealing, so I thought it might be fun to paint. Mr. & Mrs. Lyman were Polish tobacco farmers near Windsor Locks, Connecticut; they were photographed by Jack Delano in September of 1940. The photo is part of a Library of Congress (LOC) photo collection of the U.S. Resettlement Administration, the Farm Security Administration (FSA), and later the Office of War Information (OWI). The most active years were 1935-1943, and the entire collection was transferred to the LOC in 1944.

The painting is much simplified as compared to the original photo. I restricted myself to a limited palette this time, which I think worked well; I like the color harmony that resulted. The palette includes raw sienna, burnt sienna, french ultramarine, carbazole violet, perm. alizarin crimson, and Payne's gray.

There's other stuff at Flickr.
Posted by Steve Penberthy at 5:55 PM