What Lurks Down an Alley? 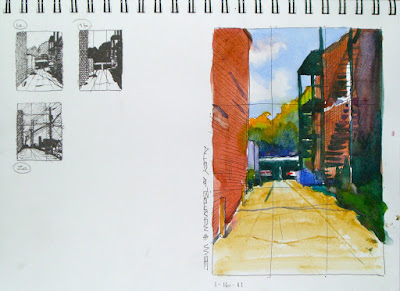 
If you're looking for ideas for landscape subjects to sketch and paint, don't rule out your nearby alley--it's a great way to practice your perspective drawing.  A perspective view really draws the viewer's eye into a painting or sketch. I guess this is why I'm drawn (no pun intended) to alleyways; they usually stretch out for a long distance, lending themselves to a single vanishing point. Plus, alleys always seem to contain such interesting, odd stuff: boxes, dumpsters, trash cans, strange lighting and fencing, what appear to be abandoned cars, etc.

Alleys in older European cities are usually the leftovers of an ancient street system.  Today,  they seem to serve as places to put out the trash or to perhaps park your car between buildings.

I wanted to do this quick sketch because alleys have been on my brain lately; I don't know why.  Since the scene has a only single vanishing point, I just kind of guessed at the perspective lines. I spent about 15 minutes creating the little thumbnail sketches, mostly to see what I wanted to do with my values. I spent about 30 minutes on the watercolor sketch, again paying the most attention to getting some really dark values into it.  You'll see that I did three thumbnails:  two of the same scene with differing value choices and one of a alleyway of telephone poles.  I didn't choose the telephone pole scene to paint since it didn't look as interesting to me as the other alley scene.  Always good to have a choice!
Posted by Steve Penberthy at 4:50 PM