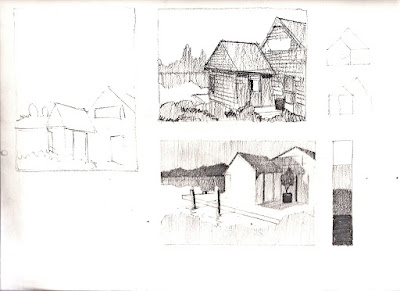 This was a timely workshop since paying more attention to value is something on which I have been working to improve. Das' instructional style is deliberate and unhurried, and he explained his concepts with great detail and patience.

It appeared that Das must be currently working on a book; he reinforced his topics with examples and images using a Word document on his laptop that he projected onto the front wall of the classroom. The Word doc was arranged into chapters...

Das spends much more time with his value sketches than he does with the formal painting. He works using only about four or five values; he mentioned that only about twenty actually exist in nature. He cautioned all of us not to confuse value with "shading." Values that are close to each other "mumble," that is, they're not clear; as few as three clear values speak loudly. Shapes that are close in value in a painting are muddy. He further taught that light creates the passages, darks create the linkages, and the middle values hold the painting together. Our goal was to make patterns in our value work by being mindful of these concepts.

The demonstration portion of the workshop began by Das showing us extensive examples of value studies from his own sketchbooks, which were 8.5" x 11" and of the bound, hardback type featuring lightweight sketching paper (similar perhaps to the Canson basic sketchbook). I love getting to peer at other artist's sketchbooks, so this experience was a real treat for me. One of the key demos he performed was to create various value studies from existing sketches using tracing paper. For example, he chose an existing sketch of a lighthouse from his sketchbook that he did on location, which was merely an observational sketch without much initial value information. Laying the tracing paper over the existing sketch, he then experimented with the placement of new light and dark patterns. He explained how to create paths for the eye to follow using light passages. From this Das discussed the concept of "designing," which he defined as visually connecting the light values together. He further explained that artists must study "conceptual light" instead of relying solely on, for example, the sun in a photo (or lack thereof as in a photo taken on a cloudy day); he admonished us to "create your own light." This is the spirit of organizing lights and darks.

From a photo reference projected on the wall, we created our own observational sketch, then used tracing paper to play with our own value design. Das provided us with heavy-weight drawing paper, tracing paper, and a Cretacolor Monolith 9B woodless graphite pencil. From there, he passed out sheets of 140-lb Strathmore Gemini paper, and we progressed onto a watercolor painting using our value sketch. My work in progress appears here: 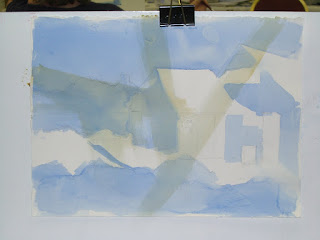 The only drawback to this particular workshop was that Das was perhaps not as organized as he could have been, and the lecture/demos extended two-thirds into the three-hour time period for the workshop; we only had about an hour to work on our sketches and painting, and sadly I had to leave before I was completely finished with my painting. 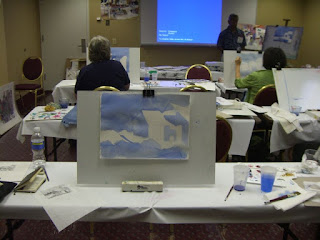 Nevertheless, it was an awesome workshop experience from which I learned much; I soon hope to be incorporating the concepts I learned into my upcoming work. Please donít miss an opportunity to take a workshop from this great artist and instructor.

I've posted various other photos/snapshots from the workshop on Flickr.
Posted by Steve Penberthy at 6:29 PM